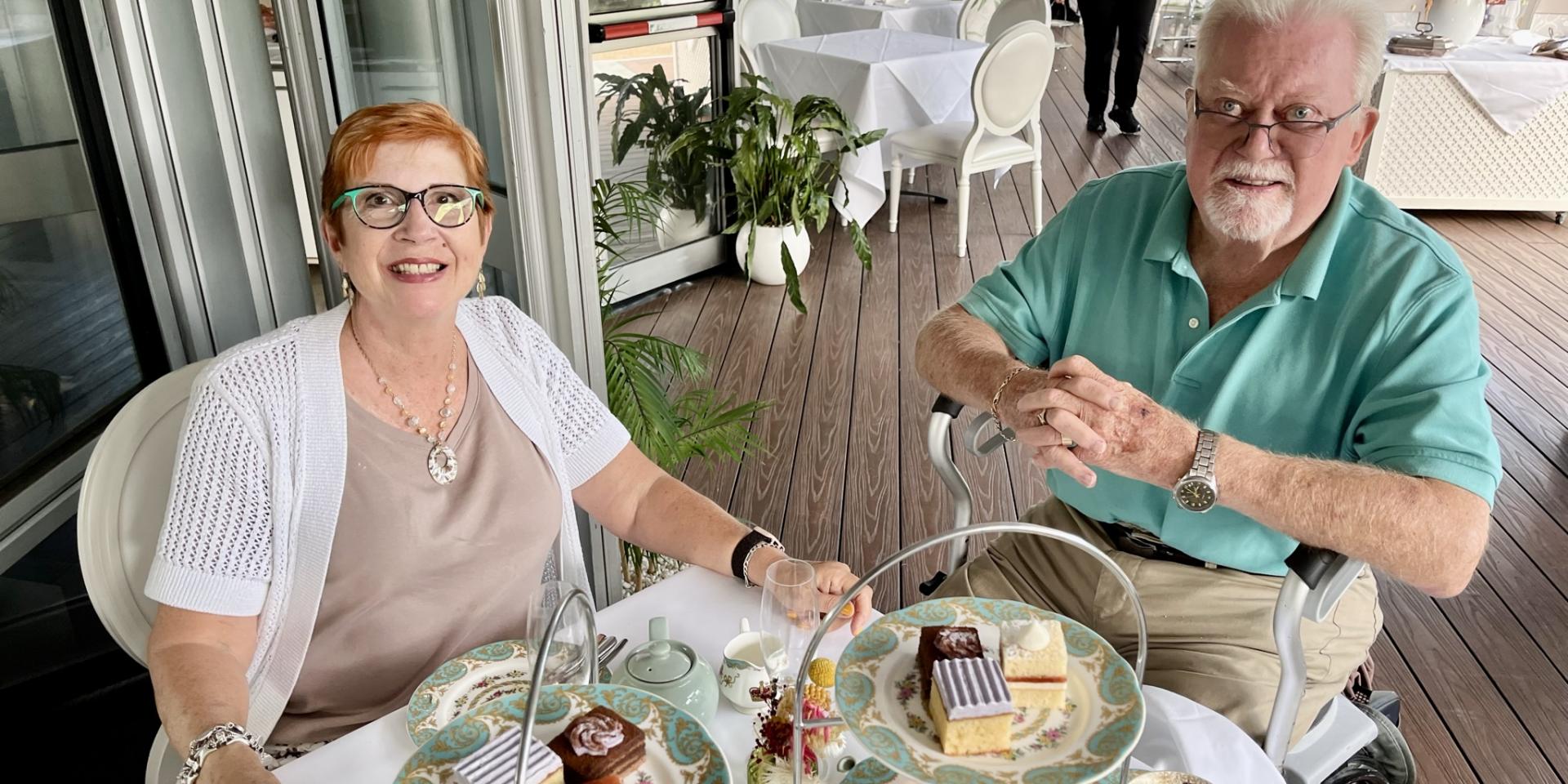 Guest blog: Our adventure continues thanks to life-saving care at MGH

Through the hospital room window, I could see my husband of more than 40 years. He was curled up in the fetal position on his bed, thin as a rail, too weak to even lift his head. Not that he would have recognized me. He was so sick he didn’t even know who he was.

In that moment, I was so afraid I would lose him.

But Paul is alive and well because of you. In fact, we will celebrate our 46th Christmas together this year, and it’s all thanks to your kind-hearted support of Michael Garron Hospital.

Thank you for giving so generously to our community hospital. Please know that your contributions really do make a difference. I’ve felt the impact of your kindness first-hand.

Last February, Paul was at Michael Garron Hospital getting his left knee replaced. It had been causing him a lot of pain and, to be honest, it was starting to cramp our active lifestyle!

Everything went great and his knee was healing nicely, but then an infection showed up in the incision. So Paul went back for surgery to treat the infection. That went well too. Things seemed to be getting back to normal, until Paul started feeling unwell. You see, he developed a pretty bad cough, and was starting to feel short of breath.

Thankfully, Paul happened to have a follow-up appointment. The doctor took one look at him and said, “Paul, you don’t look so good. And you don’t sound so good, either.” He notified the Emergency Department that Paul was on his way, and off we both went.

A lung infection leads to four weeks in hospital

Paul was at Michael Garron Hospital for four long weeks, with a very bad lung infection. He was delirious and seemed to be losing strength every day. Then I got a call saying he might need to go on a ventilator. That’s when I realized he might not make it.

But let me tell you, I’ve never seen doctors and nurses work so hard. I think they wanted Paul to live just as much as I did, and they went above-and-beyond to make sure that happened.

Somehow, even though they were dealing with an incredibly sick patient in the middle of a global pandemic, the nurses kept their spirits up. They cared for Paul with so much tenderness and dignity. When he was having a good day, they would joke and chat with him. They even had an endearing nickname for him: Poppy.

They took good care of me, as well. They comforted me as I called our children about the need to put Paul on a ventilator.

The staff could tell how distraught I was at not being able to visit in person. After all, when you’ve spent nearly every day with someone for more than four decades, it’s excruciating to be apart at a time like this.

The staff helped set up FaceTime visits, which made a world of difference to us both. Instead of sitting at home wondering what was going on, I could be “right there” with him, to ask all my questions and keep him company. Even when Paul wasn’t at his best, I could chatter on about our grandson and what our kids were up to and hopefully remind him of the life he needed to get back to. I’ll always be grateful to the Michael Garron Hospital staff for the special kindness they showed us.

After a month in the hospital and two weeks at rehab, Paul was well enough to come home. He had lost 66 pounds, was on supplemental oxygen and required a lot of looking after. But he was home and we were together again.

Another turn for the worse

I wish I could say that was the end of our troubles. But about a month later Paul took another turn for the worse.

This time, I had to call an ambulance. They raced him straight into a special room where he could be resuscitated. He was in full heart failure. The doctor was very kind, and I appreciate that he was honest with me. He said, “I don’t know how this is going to end up. The next 24 hours will be crucial.”

As I’m sure you can imagine, those were the longest 24 hours of my life. The phone calls to prepare our children for the worst – again – were heartbreaking. But once again the fantastic team at Michael Garron Hospital pulled him through. After another week in the hospital, Paul came home.

I wish this chapter finished with, “and they lived happily ever after” but Paul’s body had been through so much and his lungs were stubbornly resisting treatment. Three weeks later, we were back. Once again, Paul received outstanding care. They found what had been causing his problems: a disease called pulmonary fibrosis. He started responding very well to the steroid they gave him, and he’s been improving every day since.

The doctors are still keeping a close eye on him, which I appreciate. It shows that they care about their patients as people, not just numbers coming through the door. This all gives me a lot of peace of mind. And it’s part of what makes Michael Garron Hospital such a special place – I know it’s there for me and Paul, no matter what the future brings.

Now Paul is back home and recovering well

It’s hard to believe that just over a year ago, Paul was clinging to life and so weak he could barely open his eyes. As for me, I was wondering how I would survive without my best friend and the love of my life.

Now, Paul and I are getting back to our active lifestyle together. We’ve been able to walk to our favourite local spot for dinner without Paul needing a break. We’ve even just returned from a trip to celebrate our 46th anniversary as a couple. Can you believe it?

Thanks to Michael Garron Hospital, I have my Paul back. And our life feels like a “choose your own adventure” story again.

Of course, I’m already getting ready for Christmas. I can’t wait to have everyone together after all that’s happened.

For Paul and me, life has been a wonderful adventure together. Thanks to you, that adventure doesn’t have to end any time soon.

The outstanding, personalized care my husband received at MGH doesn’t just happen. It’s because wonderful donors like you come together to help one another. Thank you again for your compassionate support.

Donate today
Your donation will support the exemplary care our hospital provides for everyone who needs us.