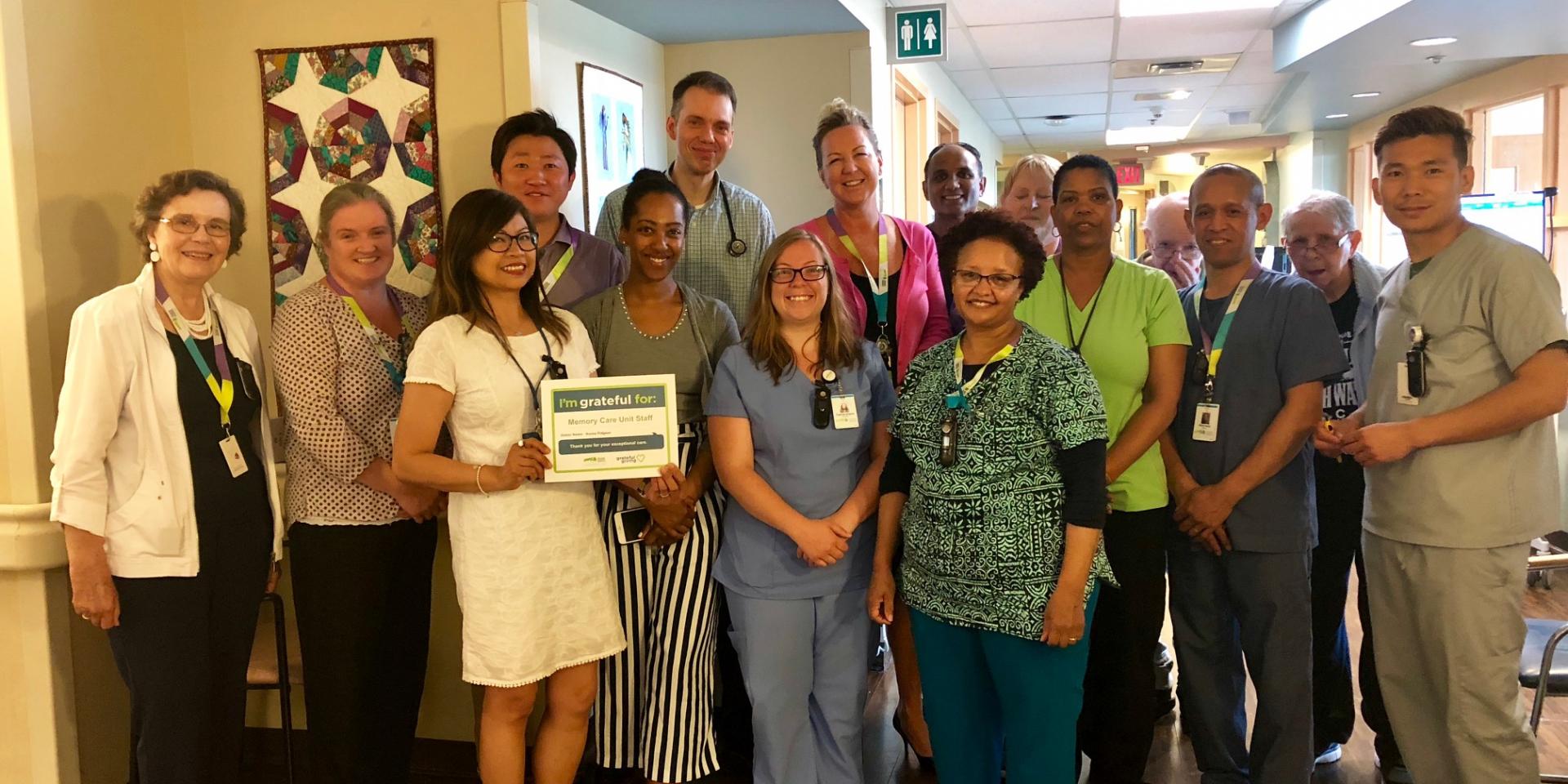 The signs that something wasn’t quite right began slowly. At first, it was easy for Norma Pidgeon to chalk up her husband Leslie’s increasing forgetfulness to him just getting older.

“When you age, you become a bit more forgetful and distracted, and you don’t process information as well,” she says. “I just put the signs of forgetfulness down to him simply being himself.”

But as Leslie’s confusion increased, and his driving became more erratic to the point of being dangerous, Norma knew there was something else going on. She recalls last year when the couple bought a new car with keyless entry – a feature that left Leslie baffled.

“Over a two-week period, we all repeatedly explained to him how it worked, but it just didn’t click,” she recalls. “At that point I realized there was something wrong.”

Leslie was soon diagnosed with Alzheimer’s, and the disease advanced quickly. A few months after his diagnosis the paranoia began, followed by hallucinations.

“If I had a piece of paper in my hand, Les would want to know if it said when he was going to die,” says Norma. “If the phone rang, he’d ask who it was and want to know what they were saying about him. It was getting really difficult for me.”

Norma reached out to the couple’s doctor again, and following further tests, Leslie’s diagnosis was revised to Lewy body dementia (LBD). LBD is a progressive brain disorder in which Lewy bodies (abnormal deposits of a protein called alpha-synuclein) build up in areas of the brain that regulate behavior, cognition, and movement. Hallucinations occur early on and there can be a violent physical component to the disease.

For Norma, the final tipping point was a hallucination episode which caused her to fear for her own safety. After Norma called 911, Leslie was admitted to the Michael Garron Hospital’s Memory Care Unit (MCU).

An ICU for behaviours

The MCU is a transitional facility dedicated to the care and treatment of individuals suffering from Alzheimer’s and other cognitive diseases. The goal is to improve patients’ behavior and quality of life to the point that they can be discharged to an appropriate care setting elsewhere, whether that’s at home or in a long-term care facility.

The unit is a safe and comfortable environment for dementia patients that Dr. Pieter Jugovic, Director of Alternative Level of Care, Rehabilitation and Chronic Ventilated patients, Complex Continuing Care and Rehabilitation has coined ‘ICU for behaviours’.

“These patients may be physically well, but they have very high needs in terms of behavioural care,” Karen Kerry, Memory Care Manager explains. “We take a holistic approach, meeting with patients’ families and gathering information to figure out how we can decrease and manage these behaviours, so patients can ultimately move elsewhere.”

The rooms in the MCU are all private, providing a safe, quiet space for individuals who can sometimes be triggered by other patients. “Sometimes simply moving here from another area of the hospital will improve a patient’s behaviour, because they have their own space,” says Karen. “The private room allows them to self soothe.”

Tapping into past abilities

The MCU team also includes an activation therapist who uses different types of therapy to engage patients, looking beyond medical needs to provide different types of stimulation like exercise and music therapy. Finding a way to tap into patients’ past hobbies or interests is often a successful way to find calming techniques.

For a disease that takes away so much, discovering a small piece of who someone used to be is rewarding.

Karen tells the story of a patient who was admitted to the MCU with pneumonia which had exacerbated his aggressive behavior. Through conversations with his wife, Karen discovered that the patient had been a composer, but until now had not wanted anything to do with music. The staff took him into one of the common areas where there was a piano, and he sat down and began playing. Though his memories had faded and his ability to do simple tasks had diminished, music was ingrained in his brain.

Those are the types of successes that make Karen emotional.

“It was wonderful to see the power of music and the effect it had on him,” she says. “We really try to focus on patients’ abilities here, rather than disabilities, and use them as a form of therapy.”

Norma is grateful for the care her husband Leslie is receiving at the MCU. So much so, that she recently made a donation to the clinic and staff through MGH’s Grateful Giving program.

“Having a loved one with dementia is much different than a physical illness”, says Norma.” My husband really lives with the demons in his head, and that’s why the care he receives here is so important. The staff here is so gifted and they perform such an important service. We really are so lucky to have this hospital here in our community.”

Have you or a loved one received exceptional care at our hospital? You can honour a member of the Michael Garron team who made an outstanding difference to you or your family by making a donation through the Grateful Giving program. The staff member or volunteer you honour will receive a thank you card with your name and a special pin in recognition of your gratitude and generosity.